In 2008 divers and underwater archaeologists discovered the wreck of a big warship at the mouth of Kieler Förde near the Bülk lighthouse. Closer examinations revealed it to be the powerful Swedish ship of the line ‘Princess Hedvig Sofia’ (Swedish: Prinsessan Hedvig Sofia). It was sunk at the conclusion of the naval Battle of Fehmarn, where Swedish and Danish squadrons clashed on April 24, 1715.

The warship itself plays a prominent role in the exhibition and is exemplary for sailing and naval warfare in the early modern period. Its fate invariably leads to the history of the Great Northern War, which raged across Scandinavia, Northern Germany and Eastern Europe between 1700 and 1721. During the early 18th century great leaders sought to shape politics and borders around the Baltic Sea in their favour. The lives of King Charles XII of Sweden, King Frederick IV of Denmark-Norway, Tsar Peter I of Russia and August the Strong, King of Poland and Elector of Saxony, are illustrated by exhibits carefully chosen from among their personal possessions. And, of course, Duke Frederick IV of Schleswig-Holstein-Gottorp and his wife, Princess Hedvig Sofia, are featured prominently in the exhibition.

Shipbuilding and seafaring at the times of the Great Northern War is another major subject. Unique drawings and models of sailing ships from archives and

museums from across Scandinavia give insight into the construction of early modern military vessels. Numerous wreck finds from warships like the Danish ship of the line Dannebroge, the Danish-Norwegian frigate Lossen or the Swedish ship of the line Kronan allow a visualisation of the life aboard a warship as well as new revelations about seafaring. Next to the quick frigates and majestic ships of the line sailing across the Baltic Sea, galleys were rowed by hundreds of men. A part dedicated to the topic of “cultural heritage under water” rounds out the exhibition. Quite a number of ships sunk in the Baltic Sea over the centuries and thus wrecks from different periods can be found at its bottom. Their disparate state of preservation necessitates an individual handling of each sunken ship. Should, for example, a wreck be completely recovered or remain in its original position on the bottom of the sea? Decisions like this and their consequences always include a political component as well. Thus UNESCO passed the “Convention on the Protection of Underwater Cultural Heritage” in 2001. By 2015 the convention was ratified by 48 nations. Its key demand is to outlaw any trade with artefacts from shipwrecks older than 100 years.

To summarize, the three major themes of the international exhibition at Castle Gottorp are: 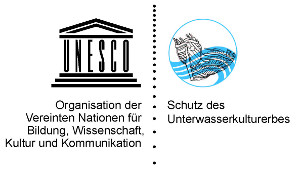